It is a fearful thing, to love what death can touch.

— excerpt from the Mourner’s Kaddish, as attributed to Rabbi Chaim Stern

It is morning and your dog wants to talk to you. You know of a spell that will enable them to speak to you through your words; it will take all day, and you will labor through many tasks with them in order to enact it, but let the labor be a joy and they will be able to tell you everything that is in their heart.

This is an epistolary game for two players, one of whom is a dog. Within the construct of this game dogs think of humans as ageless, near-immortal, untouched by sickness or death except in rare confluences of time. You know this is not true; but it does not matter. You will spend play time looking at the world and yourself through the eyes of your dog as you spend a day together exploring, playing, and enjoying each other’s company. The game will conclude with you writing a letter from their perspective, wherever they are in their life in relation to yours, to you, and then watching your dog as they dream after they’ve fallen asleep at the end of the day. Play time lasts one waking day, and the morning after.

In order to download this larp you must purchase it at or above the minimum price of $15 USD. You will get access to the following files:

Support this larp at or above a special price point to receive something exclusive.

Community Copies of Have I Been Good?

If you cannot afford Have I Been Good? at its listed price, you can claim a community copy, no questions asked.

The first time I ever read the description of this game, I almost cried just THINKING about it. At the time, I didn't have a dog of my own, but even considering the puppies I've loved and shared my life with before in relation to this made me choke up. Now I have my own little guy, and can play with him- i can't wait to weave a spell with him, and I'm once again tearing up thinking about it. Thank you for this larp 😭💖🙏

Love this. Wish it wasn't only Monday because I would most definitely be going on this adventure with Mr. Dog.

Played this with my dog Barkley for his 9th birthday. It was heartbreaking and cathartic and makes me realize just how much I value him, and how much he'll mean to me even after he's gone.

A really good excuse to take your dog on a nice long walk.

I really enjoyed doing this with my dog Gypsy over lockdown. You can read my experience of it here:

chippy, my 16-year-old dog passed away last night. i've been trying to cope since but i've just been crying non-stop. i wanted to play indie games to help me get through it and stumbled upon this. just reading through it already made me appreciate all the years i spent with chippy even more.  can't wait to actually play it. i think it will be catharctic. thank you for this.

I wanted to reply to express my condolences about Chippy. It's so hard to lose our companion animals, and I hope the game helps you honor the memory of their presence in your life and your heart, which will always be there for you.

This is a heck of a thing.

Have I Been Good? is a two-player one-day larp.

Also one of those players is a dog.

It's only four pages, but it's extremely worth your time.

Concept-wise, Have I Been Good? riffs off a number of memes and idle thoughts about dogs---that they see humans as these ageless creatures, that time runs differently for dogs, that their existential questions orbit around what humans think of them---and pulls all these elements together into a fully cohesive whole.

Gameplay-wise, Have I Been Good? shines. You play by hanging out with and interacting with your dog, and also by reflecting on that.

Some of the gameplay steps feel a little strangely paced (you write letters at a couple of points, and this sort of disconnects you from actually interacting with your dog,) but overall you're going on walks and making good food and just generally spending time with a creature in your life that the pressures of the human world might otherwise incentivize you to pay less attention to.

This might be the weirdest bit of feedback I've ever written for a game, but the only critique I can think of is that Have I Been Good? might benefit from a quick blurb about "here's how to recognize / omit steps your dog doesn't want to do." There is some guidance in the text that you should use your best judgement, but I found myself wishing it was a bit more centralized.

Also, for folks without dogs, this game feels pretty mod-able if you want to use it to hang out with other pets. You'll likely have to calibrate it based on how much the pet wants to hang out with people, but I could see it working for a cat, fox, or ferret pretty easily. For something like a bearded dragon, tarantula, or fish, you might have to redo a lot more of the structure.

Overall, I'd strongly recommend this to anyone with a dog, and who can spare a day (or even a part of a few days.) It's got a neat structure and a great concept, and it's well worth checking out.

Wonderful game. Always an interesting writing prompt, looking at yourself through another's eyes, and this game takes it even further.

A good bonding day for you and your dog.

Huge inspiration for me when deciding to write for the dog jam myself.

I should have commented earlier. It deserves being recommended.

"Have I Been Good?" calls itself a LARP for two players, one of whom is a dog. Functionally, it's more like a day-long ritual alternating between writing and activity to get you briefly inside of your dog's head. It seems to be inspired by that Tumblr post about how we seem like immortal creatures to the dogs who love us and share our lives (which is not so original an idea that it couldn't be convergent or inspired by other expressions of that idea). Made me cry just reading it (as the tumblr thing did). Seems like it would probably be fun and moving to play, tho, and I plan on giving it a try when I have a full free day with my good boy Jasper.

Gives me complicated feelings about the limits of imagination and empathy, the dangers of storytelling, the autonomy of sentience and suffering and the merits of anthropomorphism that I haven't sorted out in my head enough to expound on. 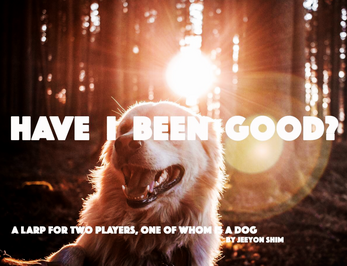 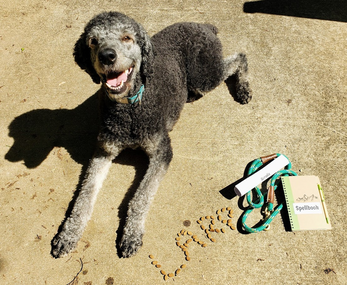